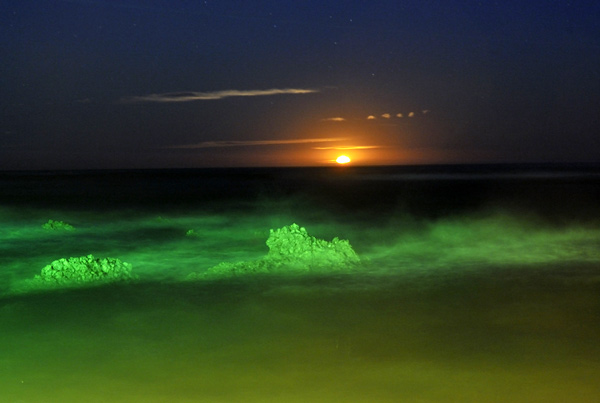 Heading south to Dunedin, we broke the journey at Kaikoura. Situated on the east coast 2.5 hours north of Christchurch, Kaikoura is a minor fishing port but whale-watching has made the town a fast-developing tourist destination. Mountains rise abruptly behind it and with the peninsula walkway also to enjoy, the place has a lot to offer visitors.

Before sunset we strolled the waterfront towards the port, watching the spring tide spray the road occasionally or erode the pohutukawa shore. It was a perfect summer’s evening after a long, hot day; it was also the night before the Christchurch earthquake – when it happened, we were barely 2 hours away, on the road down.

The nights that follow full moon offer one particular delight for the moonlight photographer – moonrises after dark, by which some lovely scenes result. You can’t get these shots before full moon, although you can of course do the setting moon before dawn instead. Here the moon was two nights on the wane, so it rose about 75 minutes after sunset.

For that interval I was happily occupied on the Kaikoura seafront and port precinct, and the tide was well on the ebb when I took this from the wharf. The lamps must be mercury rather than sodium, thus the green cast to the volcanic rocks. Focus was manual, and found by eye for a change, instead of estimation. I selected f8 rather than f11 because the shorter exposure time would give less distortion to the rising moon.

Composition is once again in natural thirds. A little bit of cloud and some foreground interest add depth. This was an impressive moonrise, the scene enhanced by the vigour of the surf on the rocks. I checked the lenses several times for spray, and for some time kept a wary eye on the unpredictable slop over the wharf. The only other hazard was the occasional motorist from the fishing group nearby.