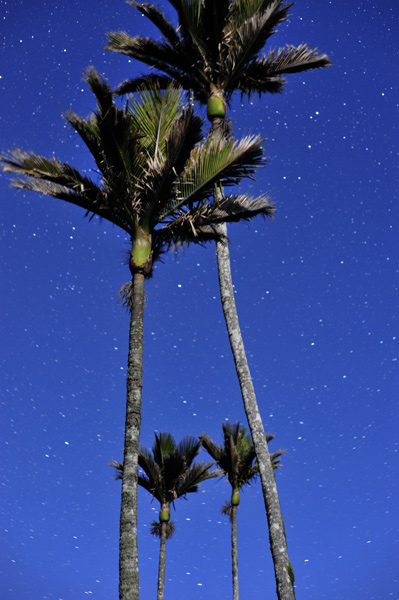 The nikau (Rhopalostylis sapida) is New Zealand’s only endemic palm. It likes company – the coastal flanks north of Te Hapu are swathed in this graceful palm – but can also stand on its own. As an iconic item in the New Zealand lowland landscape the nikau photographs well in pairs and threesomes.

These nikau pals hang out beside the track to Gilbert’s Beach at Te Hapu, a private cove on the South Island West Coast. I had walked past them many times in previous days but here at last was my opportunity after dark, by the light of a sinking half moon. Unfortunately my moonlight photography had already tested Gerry’s patience and the location was exposed to a cool easterly breeze – so my 85mm telephoto work was quick rather than careful. A 5-minute exposure at f8 would give a better result.

Even though this is not as sharp as I’d like, it conveys the mood and the depth of blue against the stars works especially well. I suspect there is still some lingering twilight in the sky, giving it a more vivid blue, but as the green fronds were at right angles to the earlier sunset I’m confident their colour comes from the waxing moon.

The main problem with my 85mm f1.4 lens in moonlight photography is not in seeing through it but in getting critical focus. I quickly found auto focus to be of no use and currently use trial & error for close-at-hand subjects, or f16 and the focus brackets on the lens for more distant compositions. My 85mm and 28mm Nikon lenses each have a depth of field that resembles a longer lens, relative to their equivalent 35mm-film lenses – or so it seems to me.

Vertical positions on the tripod ball are awkward. Fumbling around with your gear in the dark is awkward. Getting a pleasing result is not awkward.