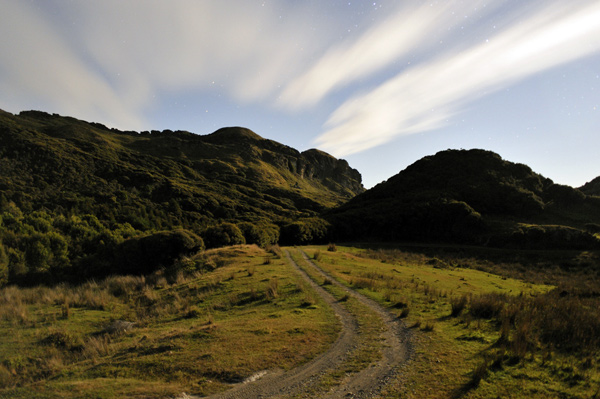 One of the minor hazards of moonlight photography is moving on from a shot before you have got the best from it, as this shot demonstrates. It was only meant to be a test exposure, although earlier frames showed that I already had this half-moon business pretty right. My main intention was to have the wheel tracks illuminated with a torch, but this didn’t work because of light fall-off, and I now realise only using a gantry or stepladder would have achieved the effect. Disappointed, I moved on without fully capitalising on the existing potential.

A test frame uses a wide open aperture and a shorter shutter than you’d usually apply to  fleeting clouds. For good clouds you have to expose more for the sky, unless you have a graduated neutral density filter, which basically splits the frame by darkening the sky. Alternatively you can do multiple exposures at different settings for later layer-and-merge processing. Being a bit of a minimalist I’ve yet to bother with either of these methods, but a longer shutter – say 60 to 120 seconds – would have delivered a stronger impression of moving cloud.

The crucial thing though is to shoot straight into the wind, as naturally that’s where the cloud’s coming from. Of course you don’t have to set up in a gale to achieve this, especially as the risk of camera shake will then match your likely discomfort. Instead, try this from a sheltered hollow (as here) and line up some good nearby features in your frame.

Gilbert’s Beach is a private cove at the end of this remote farm road in Golden Bay (www.tehapu.co.nz). The farm is wind-swept but on a good day – or night – the place is magic. Despite the low level of craft I like this simple image as a “lonely road”, especially for the way the vanishing point meets the darkened hillside.