123. Silhouette in gold, Back Beach 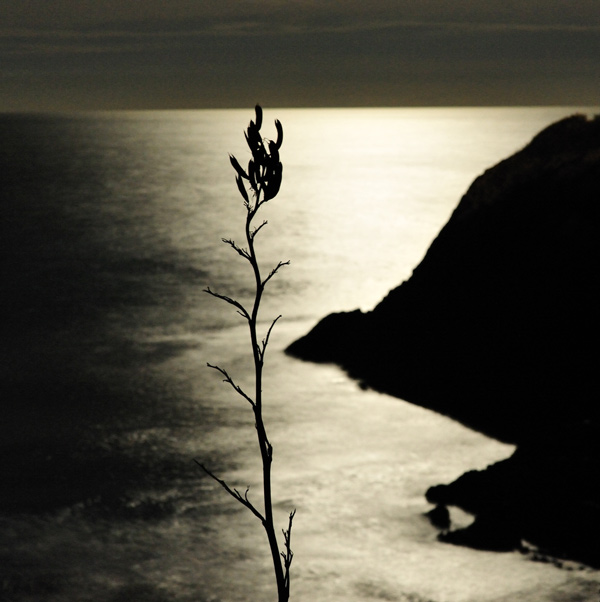 You can boost minimal moonlight by using its reflection for a silhouette – another way to employ the wan light of a slender moon. “Moonlight photography” for me means not photographing the moon itself (another subject entirely), but rather making pictures by its light. The term is freely abused by amateur photographers.

For a sharp study you want a calm night, or at least a sheltered location. At New Plymouth we had easterly winds recently, so leeward all was relatively tranquil, along the shoulder of Paritutu Centennial Park. The backdrop is the Tasman Sea and western sky lit by a sinking moon. The background silhouettes are two of the inshore Sugar Loaves; the stalk is from a flax bush (Phormium tenax), which is very tolerant of exposed coastal locations.

The highest normal ISO was used on the Nikon D700 (there are 2 higher steps, good only for exposure trials) to test for fine focus with the telephoto, after a rough guess by eye was made through the finder. My first trial shot at ISO 6400 was a mildly astonishing quarter of a second, wide open at f1.4… very rapid for night photography!

Afterwards I forgot to reset the ISO but the shorter times helped as there was a small problem with the intermittent breeeze. Top speed also enabled a smaller aperture and enhanced the background clarity. I was pleased the high ISO was not obvious in the result, as it sometimes is.

When I used 35mm B&W film I’d take this at ISO 125 and then print it on gold paper. Although I composed this through the viewfinder as a rectangular frame, I took it with a square composition in mind. In simple compositions there is often a lot of “waste” to either side with the standard 2 : 3 aspect ratio, a 35mm camera legacy. I believe the square format is more sympathetic to simple statements.